Drunk driving accidents are a serious issue in West Virginia. According to the most recent figures from the National Highway Traffic Safety Administration (NHTSA), 27 percent of our state's traffic fatalities in a recent year involved a driver with a blood-alcohol concentration (BAC) of 0.08 or above.

In recent years, West Virginia has devoted extensive resources to combating the problem of drunk driving through law enforcement efforts and public awareness campaigns. Yet, these campaigns may not be as effective as we would like.

For instance, according to the most recent annual report from the Governor's Highway Safety Program (GHSP), the state-funded program to address drinking and driving provided $139,583 to 21 law enforcement agencies in the state during the 2014 fiscal year. These funds led to:

Yet, getting arrested does not always deter people from drinking and driving. According to a report about a 2014 survey of West Virginia driver attitudes, nearly 30 percent of drivers who said they had received a DUI citation in the past "indicated that they had driven impaired in the last two months."

This survey result echoes a finding by the NHTSA that "drivers with BACs of .08 or higher involved in fatal crashes were six times more likely [in 2013] to have prior convictions for driving while impaired than were drivers with no alcohol."

In other words, even getting arrested for drunk driving in West Virginia does not stop many people from doing it again - and putting others at risk of injury or death.

For instance, in the 2014 West Virginia driver attitudes survey, drivers who said they were exposed to media messages such as "Drive Sober or Get Pulled Over" within the past 30 days "were no more or less likely to report having driven while intoxicated in the past 60 days." For many, the message simply doesn't sink in. What the above shows is that we can't rely alone on arresting drunk drivers - or publicizing the fact that they can be arrested for drinking and driving. We need to look to other tools as well. One such tool is the West Virginia "dram shop" law.

(The law's nickname comes from the fact that it is based on an old English common law rule. In England, alcohol used to be sold in units called "drams.")

Under the dram shop law, no person can sell alcohol to a person who is:

Another West Virginia law allows "any person injured by the violation of any statute" to recover damages from the offender.

Taken together, these laws impose a duty on sellers of alcohol - bars, stores or restaurants - to refrain from selling alcohol to any noticeably intoxicated patron, and they allow anyone who is harmed by a breach of this duty to hold the seller liable for their damages.

For instance, let's say a person goes to a sports bar to watch a football game and drinks several beers. Even though the person is falling off a barstool or stumbling through the bar, the bartender continues to serve him or her. When the game ends, the person leaves in his or her car and crashes into another vehicle, seriously injuring its occupants. 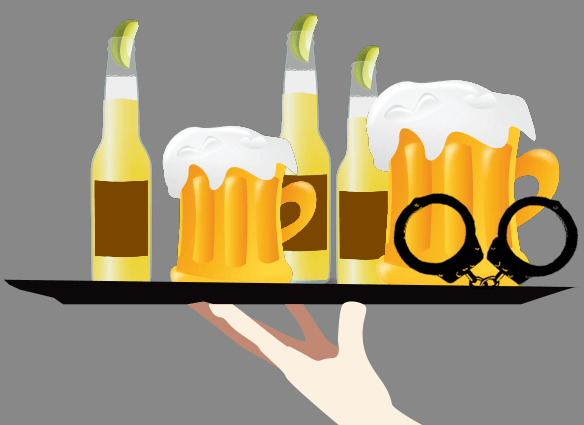 Under the dram shop law, the occupants would have the right to sue the bartender and his or her employer, the sports bar, for all medical expenses, lost income, pain and suffering and other harm they suffered. They may also seek punitive damages. A resulting verdict or settlement could be a significant amount.

In the aftermath of the lawsuit, the bar may either go out of business due to its heavy financial losses, or it may make major changes to its policies so that no intoxicated patrons are served in the future.

In this sense, by hitting bars, stores and restaurants in their pocketbooks, the dram shop law can deter them from allowing drunk drivers to get on the road.

Studies Find Dram Shop Laws Can Have an Impact

An article published in 2013 in the American Journal of Preventive Medicine concluded that dram shop laws, or laws imposing "commercial host liability" have, in fact, proven to be highly effective at combating drunk driving.

The article notes that, in a study by the Centers for Disease Control and Prevention (CDC), 54.3 percent of binge drinkers reported driving after drinking at an "on-premises retail alcohol establishment," with 25.7 percent saying they drove after having 10 or more drinks.

In states with commercial host liability laws, a 2011 study found a 6.4 percent median reduction in alcohol-related crashes, the article reports.

Take Action if You Are Harmed by a Drunk Driver

As you can see, using the civil justice system to hold drunk drivers and the bars, stores or restaurants who irresponsibly sell alcohol to them can add to our efforts to prevent drunk driving accidents in West Virginia.

If you or a loved one has been harmed in a crash caused by a drunk driver, contact an experienced car accident lawyer at Mani Ellis & Layne, PLLC, to learn more about your rights and options, which may include taking action against the establishment that served the driver. Simply call or reach us online today.