Home » About Us » Jonathan Mani 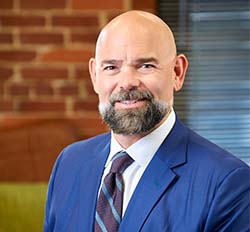 Jon Mani admits that he has always had a competitive streak - which is one of the reasons he enjoys going to court.

"I love being in the thick of a legal battle," he says. "I always competed in sports growing up and I guess it appeals to that side of me."

Representing clients in court also appeals to the sense of commitment that he and partner Damon Ellis made in 2004, when they created the firm that is now Mani Ellis & Layne, PLLC: To provide caring and professional representation to people who have been injured due to the negligence of others.

"I really like helping people," he says, "and it's gratifying when you can make an actual impact in their lives."

A native West Virginian, Jon Mani grew up living and attending school in West Virginia and spending his summers in Canton, Ohio, where his entire family is from. He received his undergraduate degree from West Virginia University in 1997 and his law degree from the same school in 2001. He launched his career working in a medical malpractice defense firm, but quickly realized he wanted to represent individuals instead of corporations. He joined a general-practice firm where he met Damon Ellis, and the two made plans to launch their own firm.

"We wanted a law firm that had a personal feel to it and a lot of community involvement," he says.

They opened shop without any clients, "but as we started doing good work, our practice started to ramp up exponentially," Mani says.

Since then, he has earned a reputation as a lawyer who can handle complex and challenging personal cases. To Mani, the challenge of achieving successful outcomes for his clients is much like putting a puzzle together, piece by piece.

"I love making connections with people and that's what trying a case really is-making a connection with jurors and presenting a case in such a way that it's impactful but is also accurate to the evidence and comports with the law," he says.

In Februrary of 2021, he became a member of the Ohio Bar, and later that year, the firm opened its office in Columbus. With a deep appreciation for hardworking people in both states, he’s proud to stand up for injured people across West Virginia and Ohio.

Pushing for Change with the West Virginia Association for Justice

In June 2020, Mani was named president of the West Virginia Association for Justice.

“It is an honor to serve as president of the West Virginia Association for Justice,” he said. “It means a lot that our members and my colleagues have placed their trust in me to represent their interests and guide their organization over the next year.”

As president of the WVAJ, Mani said he wants to collaborate with the full West Virginia Bar to improve the state’s courts and public perception of the legal community.

“Lawyers and judges need to come together to share information and ideas so that we can make the practice of law better in our state,” Mani said. “Attorneys are representing different people and different interests, but we’re doing the same job. Our profession is under attack. Working together we can not only find ways we can do our jobs better, but also improve our courts, increase access to justice, and improve public opinion of lawyers.”

Mani carries his love of the law to the broader Charleston community by participating in school career days and mock trials. He was named to the Board of Directors of the Kanawha City Community Association. And the firm has sponsored youth baseball and soccer teams and has participated in a community Christmas gift-card giveaway for client families.

Away from work, he is a fly-fishing enthusiast, and he also enjoys spending time with his family.

"My family is the center of my life and is what drives me to be the best person and lawyer that I can be," he says. "I have two children and a wife I adore."