Home » About Us » Bernard Layne III 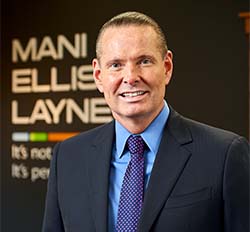 Born in the tiny coal-mining community of Williamson and raised in Parkersburg, West Virginia by blue-collar working-class parents who placed a premium on hard work, honesty, and personal integrity, Bernie Layne of Mani Ellis & Layne, PLLC learned from an early age that his path to success would have to be paved with over achievement. While both of his parents grew up in abject poverty that can only be understood or imagined by those who have experienced day-to-day life in ‘coal camp’ housing in southern West Virginia, they became acutely aware of the value and necessity of education and sweat equity as a means of rising above their circumstance.

It is from this culture and environment that Bernie's parents instilled in him, and his two sisters, to never forget where they have come from and to always use their God-given talents and abilities to help people around them who are disadvantaged, hurting, disabled, destitute, or who are being abused by those in a more powerful position than themselves in society. Growing up in Parkersburg, just across the river from Marietta and Belpre, Ohio, he gained a deep, abiding respect for the hardworking people on both sides of the border. Rising from the social position of an ‘underdog,’ it isn’t hard to understand how Bernie has come to embrace these roots by becoming a highly successful legal advocate and defender of the rights of injured working-class West Virginians and Ohioans.

As you can imagine, it takes tremendous family support and lots of competitive spirit to become one of only a few college graduates in his family and to become the first lawyer in his immediate or extended family. That love for competition was introduced to him as a child, by his father, an accomplished sportswriter at the Williamson Daily News. Bernie developed a love for the game of basketball and baseball and eventually earned a baseball scholarship to attend the University of Charleston in Charleston, West Virginia.

As a college student-athlete, Bernie was introduced to the importance of academic and athletic discipline, teamwork, handling success and overcoming failure. As his dream of playing professional baseball faded, his commitment to personal development and higher education strengthened. Before leaving UC, Bernie was named the Ivor F. Boiarsky Award Winner, which annually recognizes the top Political Science Student in the graduating class, won a statewide award for his senior thesis, in the area of Public Law Policy, on the pitfalls and environmental evils associated with an inadequate and corrupt strip mine permitting system in West Virginia, was voted by his peers as the Student Body President and was chosen by the administration to deliver the commencement address on behalf of his graduating class, while sharing the stage with the late Senator Robert C. Byrd.

Inspired to help the disadvantaged

Using his undergraduate success as a springboard, Bernie went on to attend graduate school at The Ohio University, where he received a Master of Arts Degree in Sociology. After graduate school, Bernie returned to Appalachia where he worked with elderly and disabled individuals through the Title 19 Medicaid Waiver Program in Southern West Virginia. The year spent working with catastrophically injured people through Title 19 firmed his resolve and commitment to make a difference in the lives of the hardworking citizens of this state. This experience made Bernie aware of the obstacles that face disabled and poverty-stricken individuals and the myriad of statutory and legal hurdles they face, while unable to afford adequate legal assistance to address their needs.

Bernie’s disappointment in the legal system and its treatment of handicapped, disabled, and elderly individuals led him to attend law school at The University of Dayton School of Law where he graduated with his Juris Doctor in the Spring of 1999. After finishing law school, Bernie remained in Dayton as a judicial extern for The Honorable Barbara Gorman, the first female judge of the Montgomery County Court of Common Pleas.

In the years following his law school graduation, Bernie has remained committed to preserving the rights of injured and disadvantaged citizens of our state and has limited his practice to cases which involve people who have been injured due to the negligence of another person, corporation or governmental body. Throughout his career, he has successfully taken on big corporate asbestos producers who exposed plant workers and pipefitters to deadly and cancer-causing asbestos fibers. He has successfully confronted coal mining companies that deliberately injured workers through a neglect of OSHA regulations and state laws designed to protect this state's workers. Further, Bernie has successfully resolved wrongful death cases involving children, medical malpractice and poorly designed products by large corporate interests who chose to place profits as a priority over the safety of our citizens.

Of equal importance, and staying true to his roots, Bernie has dedicated a significant portion of his practice to representing hardworking individuals who have become disabled and are seeking their Social Security Disability benefits (SSDI) as well as those folks who are disabled and lack a significant work history, but are in need of medical assistance and monthly benefits through the Supplemental Security Income system (SSI). His tenacity, experience and fighting spirit have made Bernie a top Social Security Claimants' Attorney in West Virginia. His expertise in this field has been acknowledged by the National Businesses Institute (NBI) which regularly requests that he teach segments of their Continuing Legal Education Seminars (CLE) to his peers regarding a myriad of Social Security related topics.

In 2021, Mani, Ellis & Layne, PLLC expanded to a new office in Columbus, OH. For Bernie, who earned both of his graduate degrees in Ohio and has many close family members in Columbus and the surrounding towns, this was a homecoming of sorts, an opportunity to advocate for hardworking people throughout both Ohio and West Virginia.

Recognized by his peers

Bernie's success and achievement have been greatly rewarded as he and his partners have built an accomplished law firm at Mani Ellis & Layne, PLLC. His professional attributes and success have also been noticed by his trial lawyer peers. In 2005, he was given the Distinguished Service Award by the West Virginia Association for Justice (WVAJ), which is a group that represents the interests of the injured and disabled in West Virginia. Attorney Layne has been a member of WVAJ and the American Association for Justice for more than a decade. He is past president of WVAJ, serving from June 2013 to June 2014. He has also served on the WVAJ Executive Committee (nine years), the WVAJ Board of Governors and as a member of the LAWPAC organization.

In 2013, he was appointed to the University of Charleston Board of Trustees and served on the Outreach Committee within that board. In June 2015, he was asked to serve an additional term. In 2014, he was named Alumnus of the Year at the University of Charleston. In 2017, he was appointed chairman of the Welch Challenge Campaign, an $8 million fund-raising initiative at the school.

Also in 2013, Mr. Layne received an AV rating from Martindale-Hubbell, which is the highest rating attorneys can achieve from that organization. Only 2% of all practitioners nationwide earn that rating. In 2018, Bernie was selected to the West Virginia Super Lawyers list by his peers.

On a community level, Bernie recently completed a seven-year term on the Putnam County Career and Technical Center's Healthcare Advisory Board, on which he worked with other community leaders to design, implement and guide the LPN Nursing Program at the school. His efforts in this area are consistent with his desire to work toward broad based community and rural health care initiatives which support healthcare for the underprivileged throughout our state's communities.

Attorney Layne has been recognized by Super Lawyers every year since 2018. Super Lawyers is a rating service that only honors 5 percent of eligible practicing lawyers. The selection process involves independent research, peer nominations and evaluations. Ballots are mailed to lawyers who have been in practice for five years or more, who are asked to nominate lawyers based on verdicts and settlements, honors and awards, special licenses and certifications, and legal writings.

Layne is dually licensed to serve clients in West Virginia and Ohio. 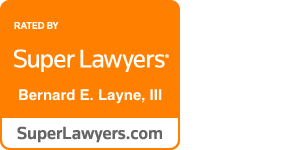