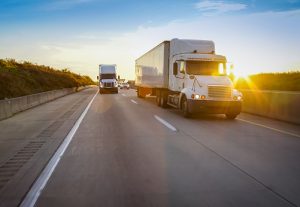 Drivers of large buses and trucks hold a lot of responsibility on the road. They are responsible for large quantities of products and people, giving their vehicles much more mass than the average vehicle. Unsurprisingly, more mass means more force, which translates into increased risk of injury or death for anyone involved in a collision with their vehicle. However, many preventable crashes are the result of unsafe and illegal driving behaviors on the part of the drivers of these large vehicles themselves. Common unsafe behaviors include speeding, distracted driving, and bumper-to-bumper driving.

There was a total of 37,461 deaths resulting from 34,439 crashes on the nation’s roads in 2016. Of these, 4,564 deaths resulted from 4,079 crashes involving a large truck or bus. This equates to a 5 percent increase in fatalities and 6 percent increase in crashes from the year before and accounts for 12 percent of all road fatalities. This is a disproportionate amount of fatalities, given the fact that large vehicles account for only 4 percent of all registered vehicles and 9 percent of the total miles traveled on our roads.

Many of these deaths are preventable, however. Roughly 34 percent of large vehicle drivers were killed because they were not wearing their seatbelt, and a further 17 percent of their deaths are connected to the speed they were traveling. Roughly 27 percent of fatal accidents occurred in work zones and 6 percent were the result of distracted driving.

It should be noted that our neighboring states, Ohio and Pennsylvania, both rank in the Top 10 for the average amount of fatal large truck and bus accidents. In addition, 61 percent of all fatal accidents of this kind occur on rural roads. West Virginia drivers should take extra caution when driving in the region, as these statistics demonstrate a higher risk of being involved in such collisions.

A highly visible law enforcement presence has been shown to deter dangerous driving behaviors, but many officers are reluctant to pull over large trucks and buses. This can be due to lack of experience, skill, and comfort when approaching these vehicles. With proper training, officers can correct the drivers of large trucks and buses with more confidence. An added benefit is the possibility of uncovering further crimes, such as smuggling and human trafficking.

When fully loaded, a tractor-trailer can weigh up to 80,000 pounds. In a crash, a car is no match for one of these trucks traveling at high speed. The damage is extensive and the car driver and any passengers can be left with injuries that are serious, if not catastrophic. Survivors may need medical care for the rest of their lives.

The truck accident attorneys at Mani Ellis & Layne, PLLC hold negligent parties accountable and help you get the compensation you need and deserve. Contact us today.