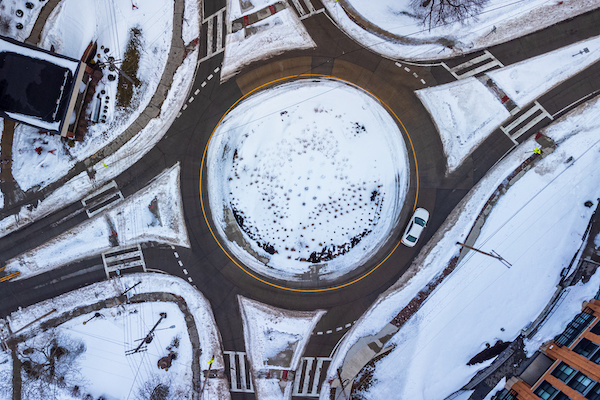 About two dozen new roundabouts are among 50 traffic projects planned for the state of Ohio, Governor Mike DeWine and Ohio Department of Transportation (ODOT) Director Dr. Jack Marchbanks have announced.

"A top priority of my administration has been making travel in our state safer – particularly at Ohio intersections that are known to be dangerous," said Governor DeWine. "Studies show that roundabouts significantly reduce the likelihood of serious or deadly intersection crashes, so we're investing in these projects today to save lives in the future."

Roundabouts are spreading throughout Ohio.

From 2017 to 2021, there were six deaths at roundabouts in the state, compared to 1,126 at signalized or stop-controlled intersections, according to the ODOT.

As of last year, there were 72 roundabouts in Franklin County on roads maintained by ODOT, up from only 12 in 2004. There are another nine that are maintained by the county. In addition, several more roundabouts are under construction or are planned.

Delaware County has 35 roundabouts. Rob Riley, the chief deputy engineer for the county, says installing a roundabout is considered whenever an intersection needs maintenance or repair.

According to ODOT, roundabouts are safer because there are only eight conflict points at roundabouts, compared to 32 at a traditional intersection.

In all, $121 million will be spent across 31 counties on the new traffic projects, including safer pedestrian crossings, traffic signal upgrades, and turning lane improvements.

Projects in Franklin County include:

If you've been injured in a crash, contact a car accident attorney.

Intersections are the site of many car accidents in Columbus and throughout Ohio. There are negligent drivers who fail to yield the right of way, run red lights, increase their speed when the light turns yellow, and fail to look for oncoming vehicles when making a turn.

A crash can leave victims with serious injuries. Medical expenses can add up quickly, and they may not be able to work. But recovering financial compensation after an accident caused by a negligent driver can be complicated, and insurance companies often dispute claims.

That's why you need an experienced Columbus car accident lawyer if you've been injured in a crash. At Mani Ellis & Layne PLLC, we know how to build strong cases and fight back against insurance companies to get the compensation you deserve. Contact us to schedule a free consultation.