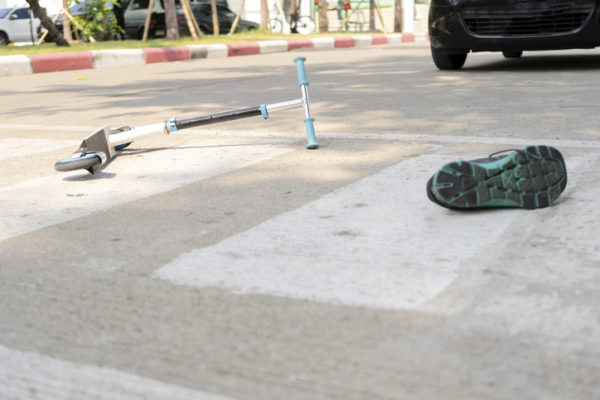 More than one month after a hit-and-run driver left her in a vegetative state, a 16-year-old Ohio girl is miraculously awake again and responding to verbal commands.

The tragic incident happened in July 2021, while the girl, who is from Columbus, was riding her scooter at the intersection of East Main and Carpenter streets. She was struck when a vehicle on East Main went left-of-center, crossed into the westbound curb lane, and hit the girl, 10 WBNS reports.

The force of the crash sent the girl flying 15 feet. She then landed on her head and suffered brain damage in multiple spots, according to local media reports.  Doctors were unsure if she would ever wake up on her own. Then, in early September, she thankfully did just that.

The young woman, whose first name is Ablessen, has regained consciousness and is undergoing speech and physical therapy after her wondrous revival.

Whoever hit the girl has not been identified, and Columbus Police are asking witnesses to come forward. A photo taken from a surveillance camera of the suspect vehicle appears to show a white, two-door sedan with a black roof. Anyone with information should call the city's police force at (614) 645-0216.

Hit-and-run accidents are a problem in Ohio, as it's often among the top 10 states that report the most fatal hit-and-run accidents per year. Crashes in which an involved driver flees the scene can quickly become frustrating for victims since you can't hold an at-fault driver accountable for your damages if you don't know who that is. Unfortunately, too many failure-to-stay drivers remain anonymous and escape responsibility.

That doesn't mean hit-and-run victims are without options. There are ways to recover money for medical bills and property damage, but you have to fight for it. At Mani Ellis & Layne, PLLC, our Columbus car accident lawyers take on the insurance companies so our clients can focus on healing. Our highly skilled attorneys know how to investigate crashes, deal with insurance companies, and build compelling cases for maximum compensation.

If you were in a hit-and-run accident, you may be able to file a claim with your insurance provider or pursue a third-party claim. The key is to talk to a car accident lawyer as soon as possible so you have a clear understanding of your legal rights and options.

What To Do After a Hit-and-Run

If you were involved in a hit-and-run, there are steps you can take to protect your rights:

Even though the other driver fled the scene of your crash, don't try to chase after them. It is illegal for you to leave before reporting the accident. The only exception to this is if you are going directly to get emergency medical attention for an injury. As soon as you are able, call 911 and report the accident to the nearest law enforcement agency. The police will respond, investigate, and prepare an accident report. They will also attempt to find the other driver.

For some injuries, you may receive medical treatment at the scene of the crash from an EMT or have to be transported by ambulance to the hospital. But even if you weren't rushed to the ER, it's critical that you get checked out by a doctor as soon as possible. Never try to diagnose yourself after a crash. Even if you're not experiencing any pain or symptoms, you may have an injury and not realize it. And if your symptoms start to flare up later, the insurance company may question why it took you so long to make a doctor's appointment.

Either the local police or Ohio Highway Patrol will do their own investigation into the crash, but you should collect evidence while you're at the crash scene too. The police are building a criminal case while you are working on an insurance claim. For starters, you should make note of anything you can recall about the driver, their vehicle, and the circumstances of the crash (include, date, time, location, etc). If there are witnesses, be sure to get their names and contact information. You should also take photos and/or videos of the crash scene from multiple angles and distances, making sure to include vehicle damage, property damage, and anything else that might be relevant to your crash.

Report the crash to your insurance company, but stick to the facts. Do not provide details. Your auto insurance policy may cover accidents caused by uninsured drivers (a hit-and-run driver is usually considered uninsured), but an insurance adjuster— even one from the insurance company that you pay — is there to protect the company's bottom line by making sure you get as little money as possible. Anything you say to an insurance adjuster, the police, or anyone else for that matter, can ultimately be used to minimize your claim.

An attorney can thoroughly review and explain what your insurance policy does and does not cover as well as identify other potential sources of compensation. If you have uninsured motorist (UM) coverage, now may be the time when you can tap into it. While it's required in some states, Ohio does not make drivers purchase UM.

An attorney can guide you down the right path

Insurance companies may balk at your claim or make you a lowball, take-it-or-leave-it settlement offer. Remember, their goal is to get rid of you as quickly and cheaply as possible. But when you have an experienced lawyer on your side, you can level the playing field and let the insurance company know that you won't be pushed around.

Our law firm knows how to hold insurance companies responsible for fulfilling the promises their policies make. To see how we can help you, contact us today to arrange a free consultation with an experienced Columbus car accident attorney.