How Fatigued Are Commercial Truck Drivers? 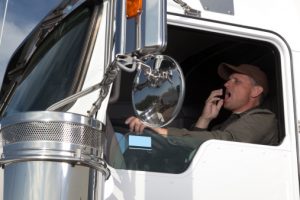 Truck drivers are a critical part of our nation’s economy and they have a tough job. Long hours and thousands of miles of driving can put a strain on their physical well-being — making fatigue an important issue that needs to be addressed.

Fatigue is a part of the job and truckers have turned to a variety of methods to minimize its impact. Caffeine, music, rolling down the windows, and even drugs are all methods they’ve used to remain alert. The prevalence of fatigue often goes under-reported, and few understand the true breadth of the issue and the efforts to combat it behind the scenes.

Unfortunately, there are few studies that specifically examine the issue of fatigue among truck drivers. One such study in 2007 by the Federal Motor Carrier Safety Administration and the National Highway Traffic Safety Administration found that fatigue was a critical factor in 13 percent of commercial truck accidents. The study also found that 7 percent of truckers self-reported that falling asleep at the wheel was the critical factor in a crash and a further 41 percent reported that minor fatigue, inattention, and work-related pressure were associated factors in a crash.

We were not able to find any other studies that have been conducted to replicate the data and reaffirm the findings or refute them. However, a related but less conclusive study found that “truckers do not sleep enough for the amount of work that they do and that they are more likely to have accidents late at night or early in the morning.” There have been studies that examine fatigue among all drivers and can provide some more insight into the extent of the problem. Driver fatigue is a difficult thing to measure, and so it is likely that driver fatigue is even more prevalent than these studies suggest. There’s no breathalyzer for drowsiness.

There have been efforts to address the issue, but attempts at regulation have met resistance from both truckers and trucking companies. With or without new regulations, truckers should still take steps to get enough sleep and remain alert. Truckers should plan ahead to ensure they are well-rested and stop to take naps when they are struggling to stay awake. Proper nutrition can also help drivers feel better physically and in turn avoid the sluggishness often associated with eating fast food. There are even alert systems that can track driver fatigue and let drivers know when they should get some rest.

Fatigued drivers are not alert and can easily cause an accident that leaves people with serious injuries. This is also a form of negligence, as there are strict regulations in place designed to prevent fatigue. The truck accident attorneys at Mani Ellis & Layne, PLLC hold negligent truck drivers and trucking companies accountable. Contact us today.