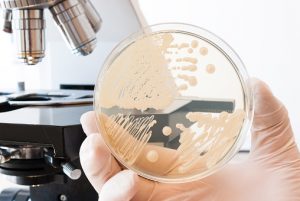 Ever hear of Candida auris (C. auris)? If not, you might want to start paying attention, especially if you have a loved one living in a nursing home or who is undergoing long-term hospital care.

The Centers for Disease Control and Prevention (CDC) defines C. auris as a "highly contagious drug-resistant fungus" that poses a serious risk of infection to nursing home residents and hospital patients. The fungi enter the bloodstream through a cut or other opening in the skin and spread throughout the body. Once a person is infected, treatment can be challenging — especially for individuals with weakened immune systems or those who have previously used antibiotics.

C. auris was first discovered in Japan in 2009 but researchers believe it may date as far back as 1996 in South Korea. Several cases of C. auris have since been documented in other parts of the world and it is considered to be an emerging pathogen. Over the past four years, it has been spreading across the United States.

An interactive CDC map documents a total of 769 confirmed C. auris infections throughout the U.S. as of July 31, 2019. The states with the most infections included:

Several other states have had less than 10 cases. None have yet been confirmed in West Virginia.

According to the New York Times, C. auris has caused fatalities within 90 days among 50 percent of people in the US who have been infected. One particular facility that was scrutinized by the Times is Palm Gardens Center for Nursing and Rehabilitation in Brooklyn, NY. Approximately 38 infections have occurred there, as the facility struggles to contain the spread of the fungus. Dr. Tom Chiller, head of the fungal division at the CDC, refers to many facilities like Palm Gardens as "the dark underbelly of drug-resistant infection."

After an inquiry into several statewide long-term healthcare facilities, the New York State Department of Health discovered something shocking. Some facilities were found to:

According to public health officials, patients who live on dedicated ventilator floors in nursing homes are the most at risk of being infected with C. auris. In addition, the spread of this fungus may be attributed to:

C. auris infections are just the tip of the iceberg. Other infections caused by bacteria, viruses, and parasites are far too common in nursing homes. As a study published in the Journal of Clinical Infectious Diseases concluded, the colonization of drug-resistant pathogens is happening in facilities at an alarming rate.

That's why nursing homes have a duty to maintain a clean and safe environment in order to protect our elders. If you have a loved one who became ill or passed away because the facility he or she lived in failed to protect them, you may be looking for answers. Situations like this can be devastating, confusing, and overwhelming. The West Virginia nursing home abuse and neglect attorneys at Mani Ellis & Layne, PLLC know this and they would like to sit down with you and help you explore your legal options.

Our high-skilled and dedicated legal team will launch an investigation and find out where the negligence occurred. We have a proven track record of helping families of nursing home abuse and neglect victims seek justice. Our case results prove it. Contact us online today to set up your free initial consultation.